Why Arsenic and its Compounds Can poison Quickly, (Acutely), as Well as Over a Long Term, (Chronically), and Why They are Used Often by Poisoners and Terrorists?

Arsenic can penetrate into the body through the skin or the lungs but Arsenic mainly enters via drinking water or food that has been eaten. Most Arsenic compounds are soluble in water to some extent and thus are easily transported in the blood stream and assimilated by the body. The water solubility also helps remove some of the Arsenic via the urine and the excrement. Unfortunately, a significant portion of the ingested Arsenic is absorbed by various bodily tissues and is retained for an extended period.

SMALL amounts of Arsenic are REQUIRED for normal operation of the body. However, larger doses can be fatal. An ACUTE FATAL DOSE of Arsenic is in the range of 2-20mg/kg body weight/day. Thus, a relatively healthy person who weight 160lbs, about 72.6kg, may die if he ingests between 0.145gm and 1.45gm Arsenic in the form of Arsenic Trioxide, As2O3. i.e. 0.192gm to 1.92gm of Arsenic Trioxide. (Arsenic Trioxide is probably the most commonly available Arsenic compound). Considering the high density of the oxide, less than 1/8 of a tea spoon can be fatal. Smaller amounts may be fatal if unhealthy people, elderly or children are exposed. The symptoms of poisoning by SMALL amounts of Arsenic are not always distinguishable from symptoms of other afflictions. Thus, although one may think that he is being poisoned by Arsenic, only exact analysis can reveal if the symptoms are due to Arsenic poisoning or due to other maladies.

Symptoms of exposure to small amounts of Arsenic vary and may include fatigue and sleeplessness increased production of saliva and sweat and hallucinations. As the exposure increases, one may start having problems with his stomach and urinary track. This may include difficulties in urination associated with pain as well as nausea and vomiting, pain in the abdomen, mainly in the bowel area including lose bowel movement and intestinal disorders. Liver breakdown always happens as a consequence of chronic arsenic poisoning. Bad odor from the stomach is accompanied by green or yellow vomit, sometimes with blood, occurs as the Arsenic exposure increases.

Sources of Exposure to Arsenic in Daily Life

Sources of Exposure to Arsenic During Occupation.

The utilization of arsenic compounds in industrial and commercial products is being slowly phased out, to a great extent due to the high toxicity of Arsenic and its compounds and the evidence that certain exposure can cause cancer. However, many materials in ordinary applications still contain arsenic and arsenic is an essential and largely irreplaceable in some applications. The main industrial uses of Arsenic are:

Although in most countries the use of Arsenic and its compounds for Applications 5, 6, 7 and 8 has been banned or discontinued, there are still many products that contain Arsenic which were manufactured before the ban took effect. This includes treated wood in children playgrounds and old containers of rat poison.

The Main Advantages that Arsenic-Containing Poisons Offer a Poisoner are:

Arsenic Trioxide, As2O3, is the most frequently found Arsenic compound. Arsenic Trioxide is very toxic, the LD50 is 14.6 mg/Kg, (Rats). Exposure to small doses of Arsenic Trioxide over a long time can cause cancer, although small amounts are REQUIRED by the body for proper functioning. In addition, some medicines, used to cure certain cancers, including leukemia, contain formulations which include Arsenic trioxide.

Arsenic trioxide is present in the water we drink, and to some extent, in every food and drink we consume. Arsenic trioxide has a complex chemistry which helps it transform to other Arsenic compounds based on its environment, and thus Arsenic can be very persistent once it’s absorbed into the body. In an alkaline environment, it forms extremely toxic arsinates, AsO2-1 ions. In very acidic media, it forms compounds such as Arsenic trichloride, AsCl3 In oxidizing media Arsenic is transforms and forms ionic Arsenate compounds, AsO4-3. In reducing media it forms the extremely toxic Arsine gas, AsH3 and depending on the environment, organic arsenic compounds such methyl-arsenic compounds, which are less toxic than the inorganic compounds.

Arsine, AsH3, is a gas used in many applications but mainly in the production of semi-conductors and fast computer chips based on gallium arsenide. Acute short exposure to 250 ppm, of the arsine gas can rapidly result in death. Arsine is absorbed by inhalation, where in the lungs it rapidly reacts with hemoglobin which results in its destruction. Very few options can be used to save a person life, but rapid removal to a place with clean air should always be the first step.

Concentrations as low as 0.5 ppm Arsenic may trigger the initial symptoms of exposure. These symptoms of exposure to small-to-moderate exposure to arsine may appear immediately or only after several hours include headaches, vertigo and nausea. Subsequently, problems related to oxygen transfer in the body due to interferences with the hemoglobin, as well as problems with the functions of the kidneys and urination may occur. The color of the urine and excrements may change to darker red-brown or even greenish color.

Arsenic has been used widely in the United States as a wood preservative.  Wood is usually pressure treated with Chrome-Copper Arsenate.  However, being applied to wood does not permanently sequester the rotting of the wood. In addition, arsenic continues to leach into the environment from the treated wood. This is a major source of Arsenic in the environment, in particular in children play grounds where arsenic-treated-wood was used to construct various structures.  Eventually, as the wood comes into contact with both soil and water, the arsenic is released to the environment.  Some forms of anaerobic bacteria methylate the arsenic, making it water soluble or extremely volatile.  Therefore, there is currently a rising level of arsenic in the environment that is biologically available and accessible.

Treatments to Remove Arsenic From the Body and Reduce Arsenic Poisoning

The probability of successful removal of arsenic from the body and minimizing its harmful effects is greatly increased if the intervention is done as short a time as possible after the exposure. The reason is that arsenic compounds begin destroying the blood cells immediately after absorbed in the blood and begin reacting in the kidneys and urinary track shortly thereafter.

The most effective methods of intervention include:

Some success was observed by using chelating agents which react with the Arsenic and accelerate its removal from the body. The most important chelating agents are Dimercaprol, (Also known as BAL), Succimer, (DMSA), and Dimerval, (DMPS).  All the chelation agents are toxic and should be used only under qualified medical supervision.

Detection of Arsenic in Food and Water

ChemSee.com has two detectors available for testing for Arsenic in Foods, Drinks and Water.  The two detectors are described below and can be purchased at the following links:

Both the AJ-05 and the AJ-LOW-01 Arsenic Detectors have their samples prepared using the same method.

The detectors were designed to predominantly test Arsenic in liquid samples such as; Water, Apple Juice, Orange Juice, Syrups, Milk and similar liquids, but they can be used to test for Arsenic also in solid foods and pasts.

To test viscous samples of liquids such as Syrups, the sample first has to be diluted by an equal volume of very clean water, preferably distilled water, and then tested.

To test samples of solid foods or pastes, the solid food has to be minced and then mixed very well with an equal volume of very clean water.  When testing, use only the water portion of the sample. Pasts such as meshed potatoes also have to be mixed with water very well before testing. 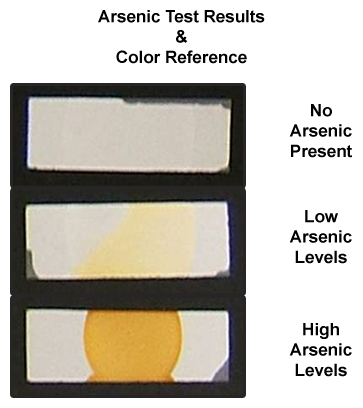 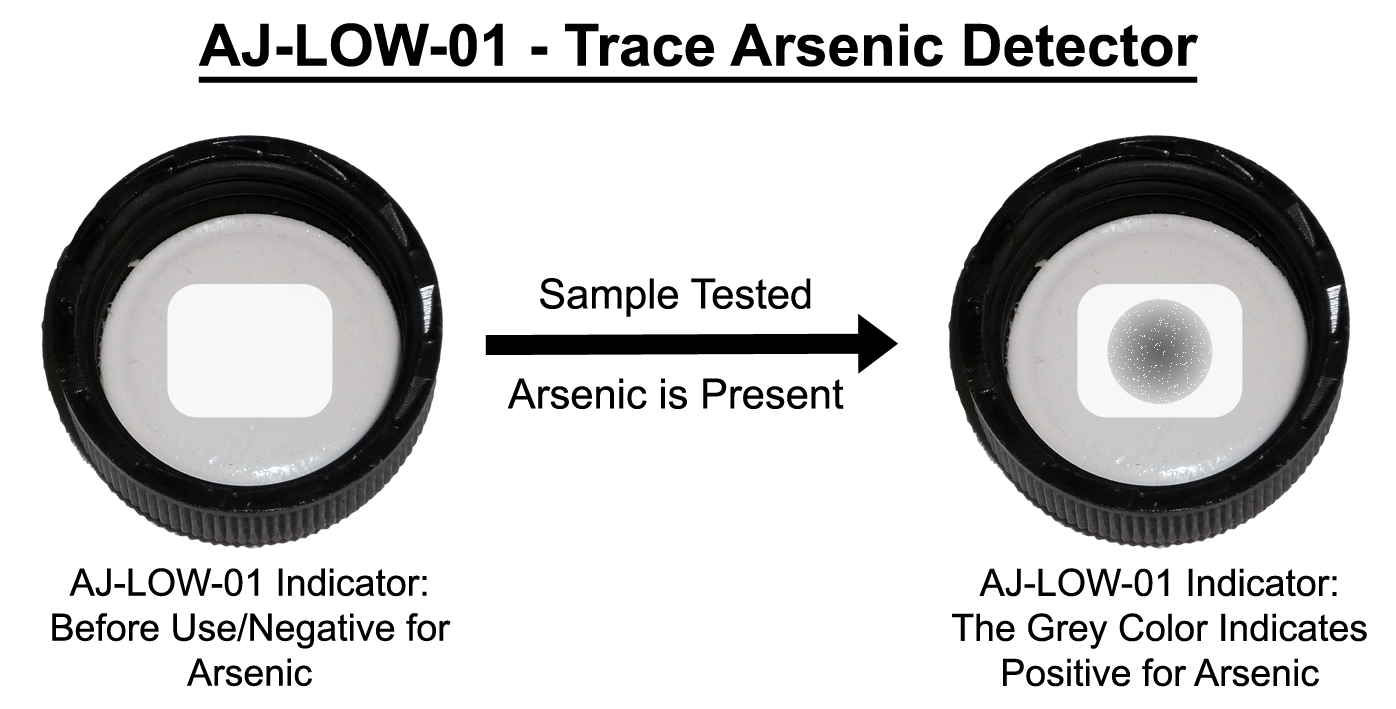